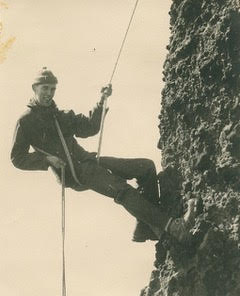 A Profile of Bob Merriam, Exum Guide in the 1950s.

Bob Merriam did one of the earliest midnight climbs of the Grand Teton, and he almost didn’t live to share the story. For most of his working life, he was a well-respected professor of cellular biology, retiring as department chair from Stony Brook University in New York. But there was a time when he had a second calling – he was one of the three guides at Exum Mountain Guides in the 1950s.

The Iowa Mountaineers and Paul Petzoldt

Merriam grew up in Iowa, far away from any big peaks. In college he joined the Iowa Mountaineers, and through their outings began to visit more mountainous places. On an expedition to the Sawtooth Mountains in Idaho in 1947, the group’s guide was none other than the legendary Paul Petzoldt.

Petzoldt was the original climbing guide in Grand Teton National Park and founder of what is now Exum Mountain Guides as well as the National Outdoors Leadership School (NOLS). Petzoldt was known for being quite a character. On this trip in the Sawtooths, the group encountered a glacial lake returning from a climb. While Merriam and his classmates walked around the lake to keep their boots dry, Petzoldt waded up to his waist in the ice cold water, just to show that he could do it the most direct way.

Petzoldt’s style was to involve people in the climbing, and Merriam, a natural climber and teacher, ended up helping out as an assistant on several of those climbs in the Sawtooths. They chalked up an astonishing 11 first ascents on the trip, including Warbonnet Peak – a worthy adventure even today[1].

In the summer of 1949, Merriam and a friend visited the Tetons to climb for a couple of weeks, where they briefly met Glenn Exum. Petzoldt had introduced Glenn[2] to climbing and guiding in the early 1930s, and they had become partners in the Petzoldt-Exum School of American Mountaineering. Twenty years later, Petzoldt was busy with other adventures, namely homesteading on a ranch he’d won in a government lottery near Riverton, WY[3]. Glenn was single handedly running the climbing school, which he now referred to as the Exum-Petzoldt School of American Mountaineering.

In the spring of 1950, Merriam got a call from Glenn inviting him to become a guide. Merriam gladly accepted, believing that Petzoldt must have recommended him to Glenn, and he must have also made a favorable impression when he’d met Glenn the previous summer.

When Merriam began guiding in 1950, there were only two other official guides – Dick Pownall and Mike Brewer. Merriam, Pownall, and Brewer would each guide a few times a week. Glenn was running the guide service, and Glenn’s wife Beth took care of the office and kept the books. After each day’s climb, Glenn or Beth would pay them in cash – half of that day’s take. Merriam felt they were paid well, and he would go home with money in his pocket at the end of the summer.

Glenn showed Merriam the ropes – what was covered in the classes, the routes and variations at the Hidden Falls practice area and on the Grand Teton, and how to set the pace and minimize the risks.

Pownall, who had been guiding with Glenn for a couple of years before Merriam arrived, became a mentor to Merriam. Pownall had also grown up in Iowa, and came to the Tetons as a high school student when his uncle Paul Franke, then the superintendent of Grand Teton National Park, secured a job for him on the trail crew[4]. Merriam remembers Pownall as reserved but affable, and a strong climber who was always generous in telling him what to expect on the various routes.

A Bear on the Lower Saddle

On an early guided climb of the Grand Teton one season, Merriam and Pownall saw a dark shape up by the Exum cache upon reaching the Lower Saddle. As they got closer, they realized it was a bear! When the climbers appeared on the scene, the bear spooked and took off down a snow chute to the left of the steep headwall. But even a bear can lose its footing, and it slipped and went tumbling head over heels all the way to the bottom of the Middle Teton Glacier. After coming to a stop, it got up –  fortunately none the worse for wear – shook itself off, and continued on its way.

The Midnight Climb of the Grand

Merriam once proposed a midnight climb of the Grand to a strong client – something no one had done before, to his knowledge. The moon was out, and they agreed to give it a try. Unfortunately, a storm came in with lightning just as Merriam had led the Open Book pitch on the Exum Ridge. He watched – both entranced and horrified – as St. Elmo’s Fire built up three times near his client, but then thankfully discharged further up the mountain. After the lightning passed, it began to snow “like the dickens,” and they made their way to a small ledge where they stood huddled together all night waiting for the storm to pass. By morning the weather had improved enough for them to finish the route, but that was the last time Merriam ever attempted a midnight climb.

The First Ascent of the Red Sentinel

Merriam recalls that on days off, he and the other guides would always go climbing – they just couldn’t get enough of it. On one such outing Merriam, Pownall, and Brewer were joined by their friend Leigh Ortenburger. Ortenburger wrote a widely-used guide book of the Teton range, now updated by Renny Jackson, a former climbing ranger and Exum guide (a new edition is in the works). The foursome had their eye on an unclimbed pinnacle called the Red Sentinel.

Pownall led the first pitch, up to a corner. Pownall planned to lead further, but it was surprisingly slippery so he backed off. Merriam took over the lead, and slowly eased his way around the corner. He tried twice to get pitons in, but lost each one on the first whack of his hammer. Soon he reached the point where he realized if he continued up, he wouldn’t be able to climb back down. This was in the days before harnesses, so any fall would be painful if not fatal as the rope tightened around his body.

But Merriam wasn’t thinking about failure. He was focused on the problem in front of him, and as he scrutinized the face, he saw small cracks that just might go. Gritting his teeth, he launched past the point of no return, and made it through. Climbing historian Paul Horton calls Merriam’s key lead of the second pitch of the Red Sentinel one of the “greatest, boldest leads in Teton history[5],” and even the understated Pownall said it was “an amazing lead.”

After seven summers of guiding, Merriam felt he had to let it go, even though he wanted to continue. This is a decision that Glenn likely approved of – Glenn felt strongly that mountain guiding was not a proper career for the intelligent, educated men he preferred to hire. As a school teacher himself, he wanted his “boys” to move on to a meaningful career and family life after their tenure in the mountains.

Merriam, then a rising professor with a young family (his son, Craig, was born in 1954, and his daughter, Donna, followed the next summer), was feeling the pressure to stay at the university in the summers. Guiding in the Tetons rather than doing research in the lab was affecting his career trajectory. As the demands continued to mount, he finally decided to leave guiding behind for the sake of his academic career and his family, after the summer of 1956.  He became a professor of cellular biology, first at the University of Pennsylvania, and later at Stony Brook University on Long Island. He retired in 1990 as department chair.

Merriam never lost his love for the mountains, and came back several times to take each of his children to the top of the Grand Teton. When climbing wasn’t an option, they went camping and canoeing. These days, in his late 90s, he leaves the actual climbing to younger, stronger legs. But his mind, sharp as ever, fondly recalls those golden years in the Tetons as an Exum guide.

[1] See https://iowamountaineers.tripod.com/leaders.htm, https://www.idahoaclimbingguide.com/bookupdates/warbonnett-peak-10200/, and the 1948 American Alpine Journal, p. 106 for more information on the Sawtooths expedition and the first ascent of Warbonnet Peak. [Return to story]

[2] To avoid confusion, Glenn Exum will be referred to as “Glenn,” as the name “Exum” is synonymous with the climbing school. [Return to story]